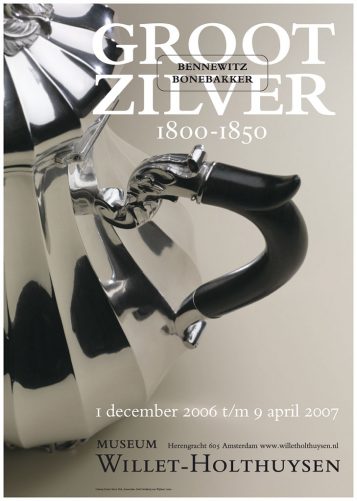 Exhibition catalogue of the ‘Grand Silver of Bennewitz & Bonebakker’

exhibition in the Willet-Holthuysen Museum in Amsterdam

From 1 December 2006 up until 9 April 2007, the Willet-Holthuysen Museum in Amsterdam organizes an exhibition called Silverware 1800-1850, showing silverware from the shops of Diederik Lodewijk Bennewitz and Adrianus Bonebakker. The museum states on its website: ‘Amsterdam has always been the centre of the Dutch gold and silver craftsmanship. Amsterdam silverware from the first half of the 19th century was even considered the highest standard for all of the Netherlands. Numerous renowned silversmiths have created for Bennewitz & Bonebakker. The Exhibition shows a selection of silverware, such as tea sets, coffee and chocolate carafes, terrines, baskets, chestnut vases, candelabras, and ceremonial objects, such as honorary swords and prize chalices.’

More antique pieces by Bonebakker can be found in the permanent collections of prestigious museums like the Amsterdam Museum and the Rijksmuseum.
Bonebakker jewellery and silverware are also displayed during temporary exhibitions, like the one about King William II in the city of Dordrecht recently, as well as during the wonderful exhibition in Het Loo Royal Palace in 2013, the year of the inauguration of King Willem-Alexander.
Bonebakker pieces are also part of the Royal Collections. 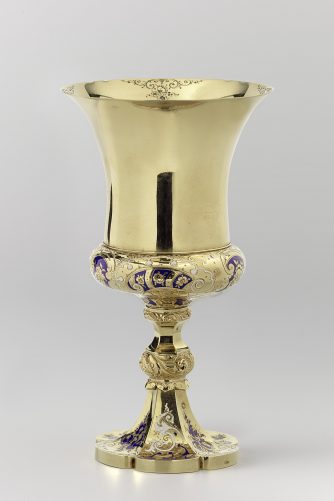 Gold chalice with blue and white enamel from 1849,

this is one of the many pieces by As Bonebakker & Son

exhibited in the Rijksmuseum in Amsterdam