Posted at 16:43h in News by Jannie Iwema 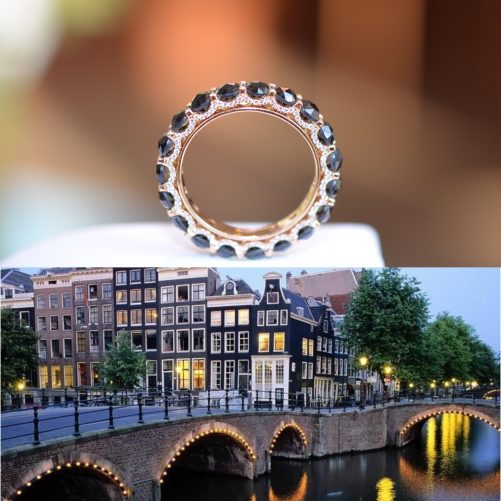 Bonebakker Jewelers has enjoyed a long and illustrious history since its foundation in 1792. Bonebakker was commissioned to create the Royal Crown of Holland for the Prince of Orange (1840) and the Silver Keys ot the city of Amsterdam (1806) for Napoleon. Antique pieces by Bonebakker can be found in the permanent collections of the Amsterdam Museum and the Rijksmuseum in Holland.
Today Bonebakker is still an innovative and sparkling jewellery atelier & boutique in the heart of Amsterdam. To celebrate its 225 anniversary the oldest jeweller of the Netherlands has created a jubilee collection: An ode to the city of Amsterdam that saw the making and the history of this unique Maison.

The reference to the Amsterdam bridges is not a coincidence. Amsterdam counts more than 1500 bridges and these are vital  connections in the city. Due to their unique shapes and designs the bridges are perceived as city jewels.

The first ring from the jubilee collection ‘Bridges of Amsterdam’ finds inspiration at the famous point in Amsterdam where most bridges can be seen at one glance: the corner of Thorbeckeplein / Herengracht. Not by chance the place where Bonebakker opened its very first establishment.