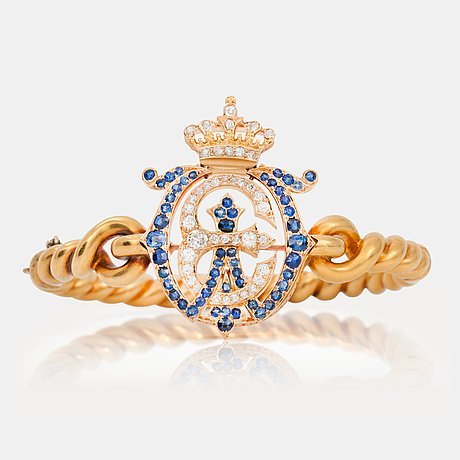 Broche of a monogram made for Queen Emma

Bonebakker has been a Royal Supplier to all the 19th-century kings of Orange. In 1865 King William III personally grants the company the right to carry the Royal Crest. William’s second spouse, the German Princess Emma van Waldeck Pyrmont, whom he married in 1879, does the same in 1882. She will become Bonebakker’s most important customer. On 19 May 1950, Emma’s granddaughter, Queen Juliana, also grants Bonebakker ‘the right to carry the Royal Crest with the title of Royal Supplier’.

In the summer months of the years 1892 to 1897, when she resides in the Loo Palace, Queen Emma orders four bracelets. Each one of the matt gold or twisted matt golden bracelets, bear the monogram W. E & crown: the W set with rubies or sapphires, the E and the crown set with brilliant cut diamonds. Each of the monograms can also be worn as a brooch.

Moreover, Bonebakker creates several little axes with golden decorations, used by members of the royal family for ceremonial ship launchings. In 1892, for example, the 12-year old Queen Wilhelmina, travels from Het Loo Palace to Amsterdam for the launch of the vessel ‘Koningin Wilhelmina’. During the ceremony, in the pouring rain, she uses one of the small silver axes created by Bonebakker.

Silver ax from 1892, for Queen Wilhelmina