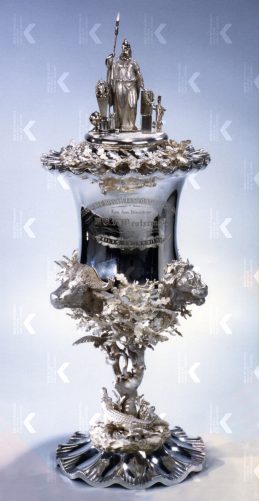 A change of course

Theodorus Gerardus Bentvelt, who had become one of the most important Dutch silversmiths of the first half of the 19th century, dies in 1853 and Jacques Antoine Bonebakker decides to set a new course for the company. He buys a property in the Korte Leidsedwarsstraat, employs able craftsmen and engages Pieter Pieterse as master silversmith. From then on, all pieces that leave the atelier bear, next to the Bonebakker mark, also Pieterse’s master mark. In 1854 the sons of Jacques Antoine, Willem Christiaan and Johannes Christiaan Reinier, become the third generation of directors in the company.

1 May 1838 had seen the founding of the society of Natura Artis Magistra (Nature as teacher of the arts). At its 25th anniversary, the members of Artis present the founder-director, dr. G. F. Westerman, with a chalice, measuring 50 cm in height. The gift is delivered by Bonebakker and is handcrafted by silversmith Pieter Pieterse.

This Artis or Westerman chalice from 1863 is a splendid illustration of the animal kingdom in all its aspects. The stand is in the shape of an oak tree and hiding within are a snake, a condor, and a parrot. The foot is decorated with an otter holding a fish in its mouth, a crocodile, a newt, a turtle, a crab and several shells. But the most elaborate decorations are situated on the goblet and consist of the expressive heads of a lion, a buffalo, and a rhinoceros. On top of the lid is a statue of Minerva, the goddess of study, who has one hand resting on a book that refers to the work of the French, natural scientist Georges Buffon.