20 Nov A fresh interpretation of an ancient ring

Posted at 22:16h in News, Signed Bonebakker by Jannie Iwema

NEW       Bonebakker Jeweler presents a fresh interpretation of an ancient piece of jewelry !

Bonebakker’s jewelry store has been selling jewelry in Amsterdam for over two centuries. As early as the nineteenth century Bonebakker received numerous prestigious commissions culminating in a new crown for King Willem II in 1840, still in use these days by the Dutch royal family.

While roots will remain imbedded deep in the age-old tradition of selling diamonds and manufacturing high jewelry in Amsterdam, world renowned brands like Piaget and Pasquale Bruni as well as haute couture pieces from upcoming designers Casato, dinh van and Maxim Voznesensky are now the new focus for Holland’s oldest and most respected jewelry house.

This winter we are excited to present our new collection of monogram and cameo rings!

These rings in mat pink gold set with a cameo or monogram elegantly showed in champagne diamonds is a modern fashionable interpretation of the ancient seal ring. 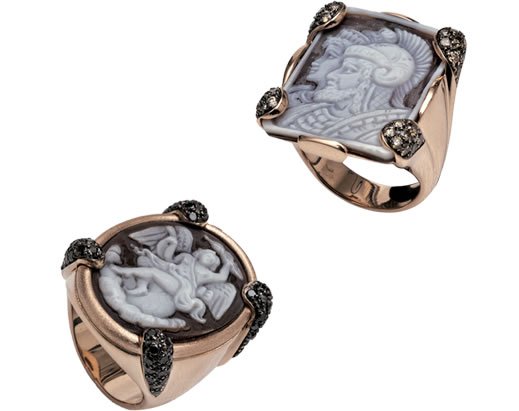 Our Collection of traditional seal and crest rings can be found here.